New Name Ministries has been ministering to ex-offenders from all walks of life since 2004. Though known nationally as being successful in residential reentry ministry for sex offenders, New Name believes their Christ centered program can also successfully impact non-sex offenders seeking to reenter society through their program of accountability and application of God’s word to their lives. This is God's ministry, that’s why it works so well. We are honored and privileged to steward such a significant and timely reflection of God's heart for the outcasts of society, sex offenders; as well as those who suffer in silence, the families (collateral victims) and victims. We believe that Christians are called to re-present the loving kindness of God, and, to bring His transforming Kingdom culture of Heaven to earth. This being so, we believe He is glorified by the redemption of outcasts and victims alike. Those (both victim and perpetrators alike) set free from the bondage of sin are truly trophies of Gods’ grace; providing light and salt to this dark world. 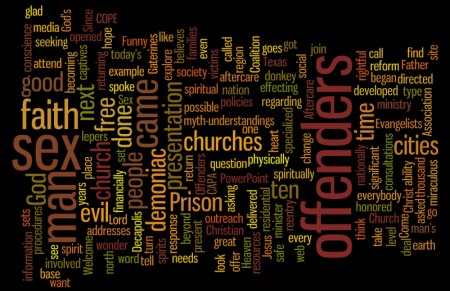 The Word tells us that God's people perish for lack of knowledge (of Him). This word knowledge can also be interpreted as vision. How true in both cases, people are scared of what they don't understand, showing a need for knowledge; likewise, those oppressed by misunderstanding, are in need of vision for a future with hope.

He who is able to hear, let him listen to and heed what the Spirit says to the assemblies (churches). To him who overcomes (conquers), I will give to eat of the manna that is hidden, and I will give him a white stone with a new name engraved on the stone, which no one knows or understands except he who receives it.﻿

JESUS HEARS THE CRY OF THE VICTIM AND PERPETRATOR ALIKE!

CHRIST DIED TO COVER ALL THE SINS OF THE WORLD

AND TO SET THE CAPTIVES FREE!

BE OF GOOD CHEER HE